Modern technology and the increasing use of hosted services has brought major changes to network and application infrastructures. While these changes have equipped users with more functionality than ever before, they have also greatly increased our dependence on a high functioning network to help us ensure the maintenance of these critical applications.

This means that when a network problem occurs, it can be even more disastrous and difficult to solve. But knowing which network problems can affect your network the most can help you understand how to identify network issues fast.

What are Network Problems

Laggy video calls, slow application speed, buffering downloads, choppy VoIP Quality, and no Internet connection are examples of network problem symptoms. If you're struggling to perform everyday tasks over the Internet, or unable to use important apps, there's a good chance your network is to blame.

Network problems impact things like, VoIP calls, ERP applications, files downloads, and more. Anytime a bad connection prevents you from accessing something outside your computer, you're likely dealing with a network problem.

There are many different network problems that can affect network performance.

Some network problems can arise from faulty hardware, such as routers, switches, firewalls, and even from unexpected usage patterns, like network bandwidth spikes, changes in app configuration, or security breaches.

Network problems are frustrating, and left unattended, they can have disastrous consequences for your business network. That’s why it’s important to understand what can go wrong with your network and to continuously monitor network performance to quickly identify and fix network problems even before they affect your end-users.

The Most Common Network Problems

Now let’s run through some of the most common network problems that have left many users and network administrators pulling out their hair!

Bandwidth is the maximum amount of data transmitted over an Internet connection in a given amount of time.

It refers to a network’s capacity to transfer data between devices or the Internet within a given span of time. Bandwidth is often mistaken for Internet speed when it's actually the volume of information that can be sent over a connection in a measured amount of time – calculated in megabits per second (Mbps).

Higher bandwidth allows data to be transferred across your network at a faster rate and can sustain a larger number of connected devices all at once. When someone or something, like a large application, on your network is monopolizing your bandwidth by downloading gigabytes worth of data, it creates a congestion in your network.

Network congestion caused by high bandwidth usage, also runs the risk of leaving insufficient amounts of bandwidth for other parts of your network that need it. When this happens, you may start experiencing problems like slow download speed over the Internet.

Causes of high bandwidth include:

Downloads consisting of large files that are being placed on your computer's harddrive from the Internet, like file transfers or backups, can drastically increase bandwidth usage. The more bytes the file contains, the higher your bandwidth usage.

Latency refers to the time it takes for a data packet to reach its destination in a network, can. Consistent delays or odd spikes in delay time are signs of major performance issues and can affect bandwidth time.

Packet Loss occurs when a data packet is dropped during its journey across a network and never makes it to its final destination and back. It can cause a great deal of problems depending on how much of the packet does not go through and how often it occurs.

Different applications have different requirements. Applications that require Internet connection, like programs for web development, email, computer games, etc. require a lot of bandwidth to function and can therefore increase your bandwidth usage.

There are programs that allow users to share files from computer-to-computer connection over the Internet. These programs can result in high bandwidth usage as they require you to download and transfer large files, with large amounts of data, over the Internet. 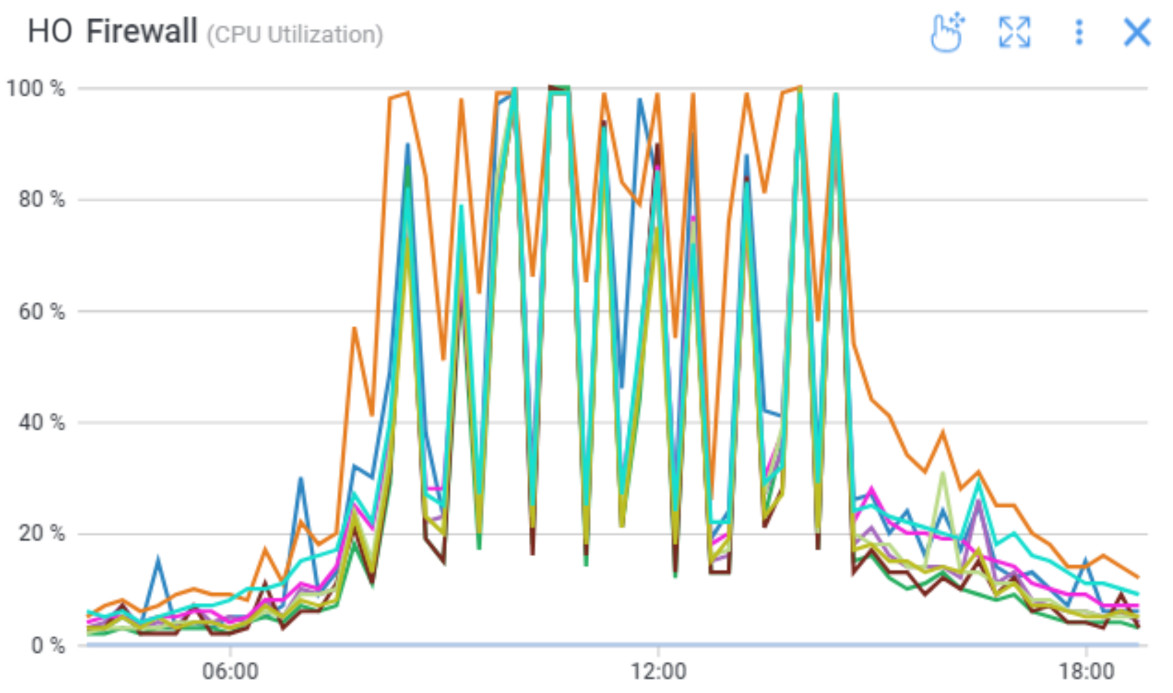 CPU, or “ Central Processing Unit”, is the primary component of a computer that receives and processes instructions for operating systems and applications.

With such a big job on its shoulders, the signs of high CPU usage on a network device are a very troubling sign for many of us.

As your network devices continue to work harder to perform an increasing amount of tasks, it increases the chance that things can go wrong.

The most common reason for high CPU usage occurs when your network becomes bogged down by enormous amounts of traffic. CPU usage can increase drastically when processes require more time to execute or when a larger number of network packets are sent and received throughout your network.

There are a number of network devices such as switches that have hardware components (ASICs or NPUs) that take charge and process packets super quickly. For this equipment, the CPU usage is not linked to the amount of traffic.

For equipment that analyzes or manipulates traffic, like firewalls, that's a whole different story. Depending on the features that you’ve enabled on your devices, the CPU may be in the critical path of packet routing or forwarding. If overused, network metrics like latency, jitter, and packet loss will increase, which will lead to significant levels of network performance degradation.

It can sometimes be difficult to gather the right information about the actual use of CPU. Several monitoring tools such as those included in the equipment's GUI or a poorly configured monitoring tool can report an average value on the use of 8 cores or over too long periods, such as every 5, 15 or 60 minutes.

It may seem obvious, but some network issues may occur with the hardware outside of the network.

When the time comes to troubleshoot network problems, , our instinct is often to think about the most complex situations, when sometimes the problem is actually very simple and right in front of us.

Hardware problems like defective cables or connectors can generate errors on the network equipment to which it is connected. You may think that this problem is due to a network failure, or Internet connection problem, but it’s actually because you have a broken or malfunctioning cable.

This can also occur outside of the LAN infrastructure. If a copper cable, or fiber-optic cable is damaged, it will likely reduce the amount of data that can go through it without any packet loss.

Checking every cable one by one can be repetitive, and can take a large amount of time out of your day. A simple way to monitor cables on a defective connector is to have a network performance monitoring software that will measure errors on all network interfaces and warn you if any problems arise.

Problems can be due to bad configurations, faulty connections, packet loss, or maybe just because they’re been disabled.

Many network performance issues are caused by device misconfigurations that can affect different parts of your network and turn into major problems down the line. That’s why you need to pay attention to all the switches and devices on your network to ensure that they’re always working as they should be, and react quickly if they aren’t.

Obkio’s network device monitoring solution is a simple and easy solution that offers advanced polling to monitor all SNMP-enabled devices along your network to ensure they’re all performing as they should be.

Learn everything about continuous network monitoring to proactively optimize network performance and solve network issues anywhere along your network.

DNS or Domain Name System, controls how visitors find your website over the Internet.

It is essentially a directory for the Internet (and every Internet-connected device) that matches domain names with IP addresses. Every single website has its own IP address on the web, and computers can connect to other computers via the Internet and look up websites using their IP address. When you type in a domain name in your Internet browser, DNS works to find the information connected to that domain.

DNS issues are very common network problems that many people tend to overlook. DNS issues occur when you are unable to connect to an IP address, signalling that you may have lost network or Internet access. For example, your site can simultaneously appear online for you, but looks to be offline to your visitors.

Other DNS issues can be due to:

The inability to access the Internet or particular sites can have a very immediate and negative impact on your business - especially if it means that users cannot access your site. Just a few hours offline can cost your company in more ways than one, which is why it’s important to find and fix DNS problems as soon as possible.

6. Interference in the Wireless Network

WiFi problems are one of the most common complaints surrounding modern day connectivity.

Wireless interference occurs when something disrupts or weakens the Wi-Fi signal transmitted from your wireless router.

Signs of wireless interference include:

Very common household items, like microwave ovens or cordless phones, can slow down your home Wi-Fi network performance. If you live in a densely populated area, your neighbors’ Wi-Fi networks could actually be interfering with your own. This is particularly true if you’re using a 2.4GHz wireless router.

However, seeing as a failure can occur at any time, the first challenge for network administrators is to quickly identify what can cause interference as well as the precise time they occurred.

While users are usually quick enough to report problems, it’s ideal to identify and solve the problem before it affects users.

How to Identify Network Problems

Identifying network issues is the first step to solving them - and it all comes down to pinpointing who, what, where, and when.

We recommend a software like Obkio Network Monitoring Software because it does the work for you.

Obkio uses Monitoring Agents installed in key network locations to simulate synthetic traffic in your network, identify network problems and collect information like we mention in the next step...

The step when it comes to identifying network problems, with your Network Monitoring tool in hand, is performing a network assessment to collect some key information about:

Learn how to identify network issues by looking at common problems, causes, consequences and solutions.

There are a variety of network problems that could take over your network at any given moment. With the growing complexity and size of modern network infrastructures, network problems can be more frustrating than ever.

Knowing about some of the most common network problems helps you prepare for what your network may encounter in the future.

Obkio is a simple Network Performance Monitoring SaaS solution for IT pros to help you continuously monitor the health of their network and core business applications to improve the end-user experience!

Top 7 Reasons Why You Should Monitor Network Performance

Learn how to identify network issues by looking at common problems, causes, consequences and solutions.