How to Detect Network Congestion

What is Network Congestion?

Network Congestion, similar to road congestion, occurs when your network cannot adequately handle the traffic flowing through it. This can be caused by events such as faulty or over-used devices or even bad network configurations.

While network congestion is usually temporary, it can cause annoying network problems that can affect performance, such as high levels of jitter, packet loss, a decrease in throughput, and can be a sign of a larger issue in your network.

Because of this, it’s important to have a tool that can proactively detect network congestion and perform a network congestion test in your own network, and even outside of your network so you can troubleshoot before it affects your end-users, or turns into a much bigger problem that your IT team will be stuck dealing with.

Unlike traditional monitor solutions that may only monitor local network equipment, Obkio allows you to monitor performance from every end of your network, where you may not have any IT staff or equipment available.

Obkio does so with synthetic traffic using Network Monitoring Agents, which monitor all ends of your network to measure network metrics, identify network problems (like congestion) and collect the information to help you troubleshoot.

Use Obkio’s free trial to begin.

Additionally, the network congestion may not be actually happening in your own network, but maybe in your ISP’s network, on the local loop of its connection or even on the Internet.

Luckily for you, Obkio continuously measures these core network metrics and displays them on Obkio’s Network Response Time Graph so you can easily view metrics in real-time.

Obkio will also automatically notify you of events like substantial packet loss or high levels of jitter, so you know as soon as it starts happening!

Network congestion can cause dropped packets (aka packet loss), and increased latency and jitter. That’s because, when network congestion occurs, data packets can accumulate (like cars in a traffic jam), leading to a huge buffer.

It then takes time to empty and refill the buffer, which increases latency and jitter. If the buffer is small, the latency won’t increase too much but more packets will be dropped. Depending on the network equipment, the buffer size can be adjustable or it can be fixed in the hardware. 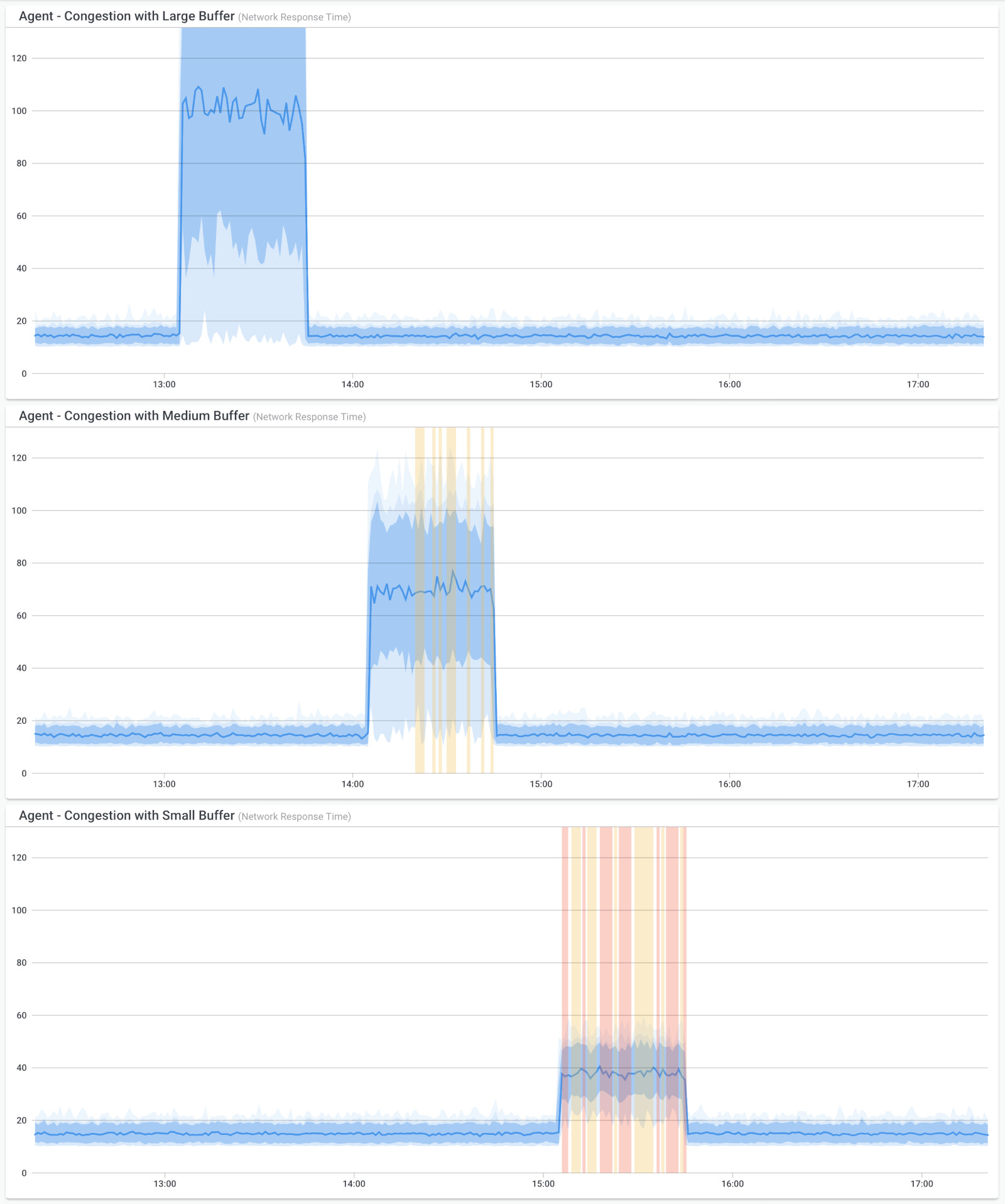 In this screenshot, you can see three graphs.

If you’re reaching your limit on the amount of traffic your devices or Internet connection can handle, then you’re sure to experience network congestion.

If you’re only monitoring your devices, you may not find the problem if it is located elsewhere, which is why it’s important to primary monitor the network metrics we mentioned above.

Step 4. Identify a Lack of Resources

Network congestion commonly occurs when your network devices or Internet connection are lacking the resources available, such as bandwidth or CPU, to process traffic flowing through the network.

In the screenshot below, we can see an example of high CPU usage on SD-WAN Devices affecting all sessions (in the second column). This means that the network device does not have enough available resources to manage the throughput. Since it cannot process data packers properly, it will end up dropping them and causing packet loss. 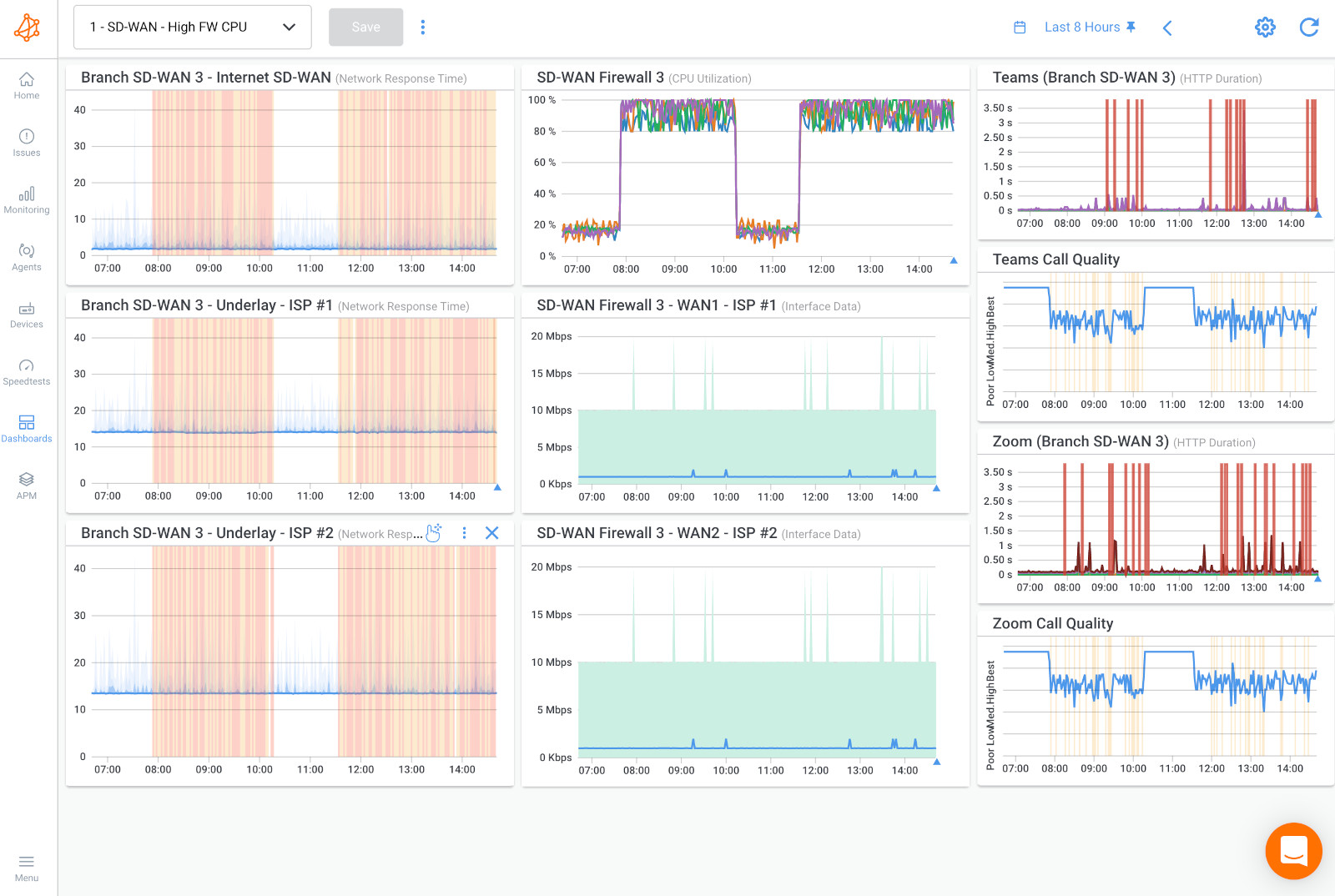 How to Identify a Lack of Resources

In all these circumstances, you can set up Network Device Monitoring with SNMP monitoring.

They will poll interfaces and graphs for bandwidth usage (inbound / outbound traffic) and detect short bursts of traffic or CPU utilization that affect network performance.

Step 5. How to Reduce Network Congestion

If you've performed your network performance test and realized that you’re experiencing network congestion due to a lack of resources, here are some suggestions:

Look into the traffic going through your devices. Understand if the traffic is legitimate or not by looking at the firewall logs. Illegitimate traffic might be a security breach (data exfiltration), or mass data backup during business hours.

Upgrade your Internet connection bandwidth with your ISP if you’re just running out of bandwidth. This will increase your resources availability.

If your network devices can't handle the traffic going through them, you can also simply decrease your usage. This can mean allocating times during the day where you minimize traffic.

Depending on the network, you can use QoS (Quality of Service) to prioritize some traffic on the network in order to reduce high bandwidth or CPU usage causing congestion. Learn more about how Obkio performs QoS Monitoring with DSCP Features.

Learn how to monitor QoS performance on your private network, including MPLS, SD-WAN, or VPN, using Obkio's DSCP features.

With Obkio you can also identify network problems and collect the information you’ll use to troubleshoot the network congestion.

Create your own Obkio dashboard with a summary of your network metric measurements and data you need to troubleshoot the network congestion, including:

With this setup, you can now proactively detect and troubleshoot network congestion before it starts impacting your network performance and user experience! It’s like finding an alternative route to avoid road congestion.

Use Obkio's Free Trial to get started!